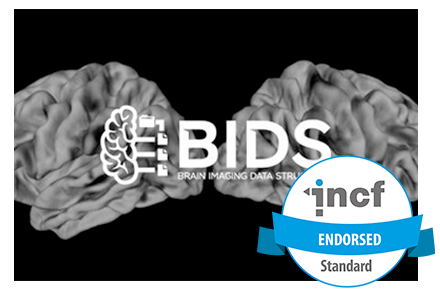 A new "Perspective" in Frontiers describes BIDS-Microscopy, an extension of the INCF-endorsed standard BIDS for microscopy data. The extension is included in the latest release of BIDS (1.7.0) as BEP031.

BIDS is a standard prescribing a formal way to name and organize MRI data and metadata. The early development of BIDS was originated and supported by INCF as a part of its Neuroimaging Datasharing Task Force activities, and it was the first standard to be formally endorsed by INCF.  BIDS has grown very popular, and is now supported, maintained and developed by a large community of hundreds of contributors. Several extensions of BIDS have been adopted in  recent years, and more than 20 additional extension proposals are currently under development.

Microscopy is widely used in neuroscience to study nervous tissue in very fine detail, and results in big and complex datasets. Organizing and sharing this data is challenging due to the variability in methods and data formats, so standardization would bring many benefitsl.

​​Microscopy-BIDS defines a standardized structure and naming scheme for raw microscopy data. It aims to cover the most common methods, including 2D/3D, ex/in vivo, micro-CT, and optical and electron microscopy. It also includes comprehensible metadata definitions for hardware, image acquisition, and sample properties.

The extension adds three terms to describe animal data; naming the species, the specific strain of this species, and the RRID (Research Resource ID, a PID for research objects) that identifies the strain. During the development of BIDS-Microscopy, the group collaborated with the BIDS community and the team behind another animal data structure, the animal electrophysiology extension proposal (BEP032), to harmonize incorporating animal metadata to the specification and describing  multiple samples from the same subject.

Microscopy-BIDS also introduces three new terms to describe experiments; “sample” to allow for multiple samples from the same individual, and “chunk” to describe different regions imaged from the same physical sample under the microscope in the same imaging experiment (in the context of microscopy, a single sample can be acquired through a series of images or volumes with different fields of view). The final entity, “stain”  is used to distinguish files from the same sample using different stains or antibodies for contrast enhancement.

Microscopy-BIDS supports three file formats. For non-tiled 2D data, the broadly used PNG and TIFF (.png, .tif) formats, readable by various image editing toolboxes. For large resolution whole-slide imaging and 3D data, the standardized file structure OME-TIFF developed by the OME consortium was chosen (.ome.tif, .ome.btf ) to allow for storage of tiled and multi-dimensional 5D+ data, allowing the Microscopy-BIDS specification to include higher dimensions (e.g., time) as their usage becomes more common. Files from different proprietary formats can be interpreted and converted to OME-TIFF via the Bio-Formats library and a number of other specialized toolboxes.

The development has been an intensely collaborative process with several rounds of community input. The initial data structure proposal was first shared on Neurostars and the BIDS mailing list in June 2020 for community feedback. Based on that community input, the official extension proposal was ready in August 2020. More feedback was requested and integrated, after which  a series of meetings held during the first half of 2021 helped finalize the finer details.Finally, in November 2021, the BEP underwent community review on the BIDS Github and was then integrated into the BIDS-Specification as part of the release 1.7.0 in February 2022.