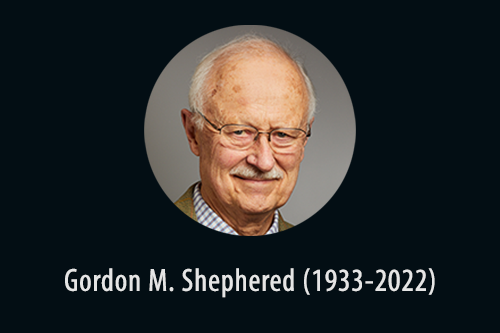 The INCF Secretariat and community are deeply saddened to hear of the passing of Gordon Shepherd: a great supporter of the INCF mission and a much appreciated friend and colleague. Gordon will be sorely missed and his enthusiasm and kindness will live on - he was a truly neuroinformagical person.

Gordon Murray Shepherd (1933-2022) combined basic experimental and computational research to study how neurons are organized into microcircuits to carry out the functional operations of the nervous system. As an early adopter of several techniques, he had a leading role in development of several new neuroscience subfields, particularly in computational neuroscience and neuroinformatics, but also in cognitive neuroscience, brain microcircuits and neurogastronomy. At the time of his death, he was professor of neuroscience emeritus at the Yale School of Medicine.

His model system of choice was the olfactory system. As a graduate, he studied the electrophysiology of the olfactory bulb and produced one of the first diagrams of a brain microcircuit. Building on this work, he then collaborated with Wilfrid Rall - famous for his cable theory and considered one of the founders of computational neuroscience - to construct the first computational models of brain neurons: the mitral and granule cell. 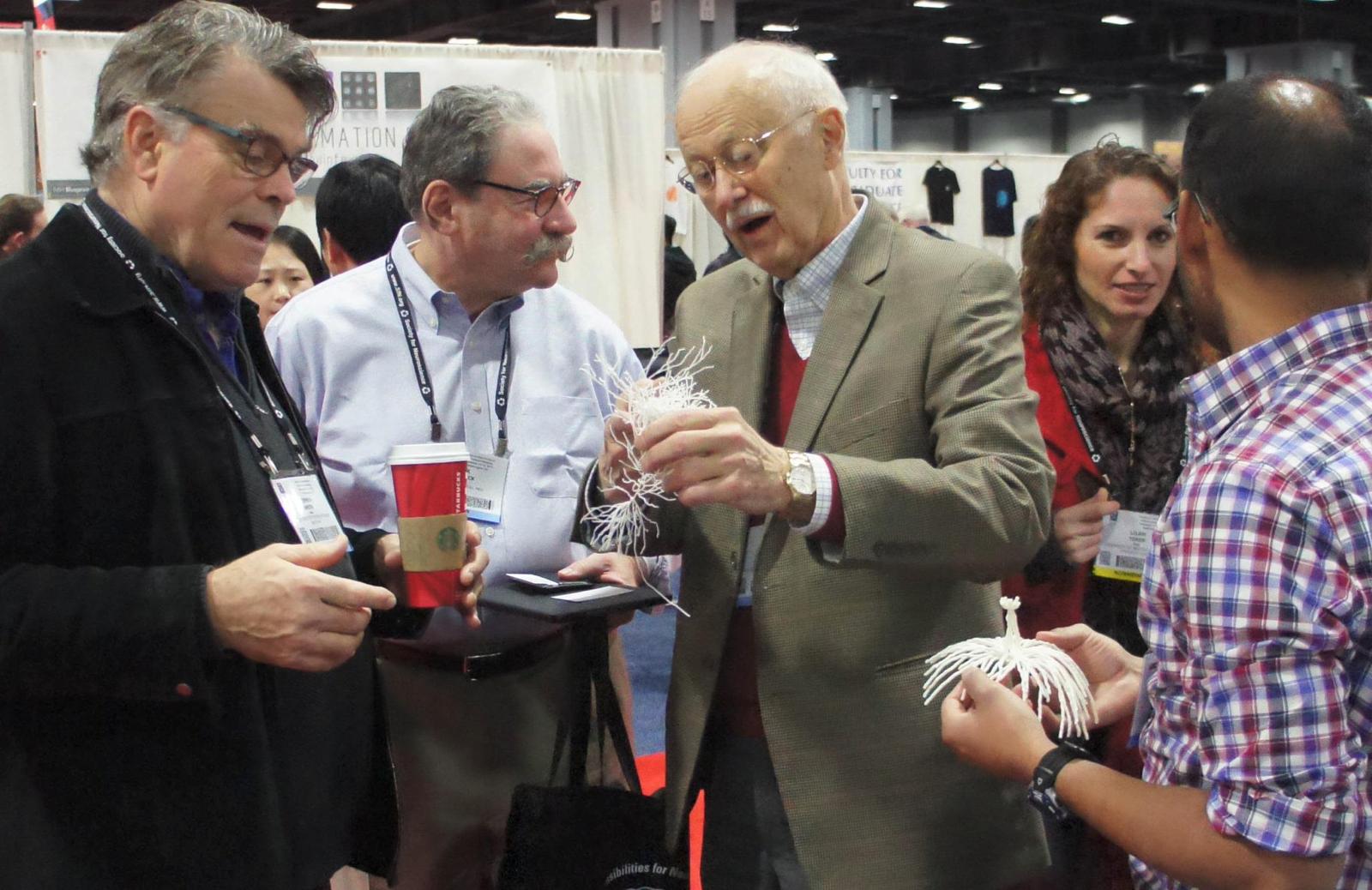 Gordon Shepherd in the INCF booth at SfN 2014, showing 3D-printed cell models (read more about them)

Their continued collaboration on computational models of the olfactory system led them to the revolutionary prediction, in a 1968 paper (described later as “a work of art”), that mitral and granule cells interact with each other via dendrodendritic synapses. It is a rare example of using a theoretical model to predict a previously unknown anatomical connection and its physiological action.

Continuing to adopt new techniques, Gordon Shepherd and collaborators used brain imaging - in 1975, when it was still very new - to reveal (for the first time) that odors are encoded by different spatial activity patterns in the olfactory glomeruli of the olfactory bulb.

Shepherd was also an early adopter and supporter of using technology and informatics in neuroscience. His SenseLab project, for development of neuroinformatics tools in support of neuroscience research, was founded in 1993 as part of the original Human Brain Project sponsored by the National Institutes of Health, National Science Foundation, and several other government funding agencies in the United States.

”I have known Gordon over a very long time and as physiologists, we have both had the view that the brain cannot be understood without complementary modeling and neuroinformatics. In that spirit we edited the Handbook of Brain Microcircuits” - Sten Grillner, founding chair of INCF

Gordon Shepherd was involved in INCF and its US Node since the beginning of INCF activities, and a regular and much appreciated visitor in INCF’s booth at SfN. He was also the scientific organizer for INCF’s 2007 workshop on Global Portal Services for Neuroscience, participated in the INCF Electrophysiology Data Sharing Task Force and held a keynote talk at INCF’s 2012 Neuroinformatics conference.

“Gordon was one of the founders of what we now call neuroinformatics and a great friend and supporter of INCF.  He was a mentor and role model to me in my first effort to lead a big project, the Neuroscience Information Framework. I was always inspired by his enthusiasm, breadth of knowledge and kindness.” - Maryann Martone, INCF Governing Board Chair and INCF US Node lead

The Senselab project used novel informatics approaches to constructing databases and web-enabled applications for collecting, modeling, analyzing, and sharing neuroscience information, with a focus on building experimental data into integrated, multidisciplinary models of neurons and neural systems in order to gain insight into the neural basis of behavior - and still unusual then, they made the gathered information public and accessible.

One notable example is SenseLab’s ModelDB database, founded in 1996, to make it possible for computational neuroscientists to easily share their models. The repository had a crucial role  in the development and scientific credibility of the then still new field of computational neuroscience. ModelDB is still in active use and contains more than 1600 models. Senselab also pioneered text-mining of the neuroscience literature to populate databases, initially NeuronDB for neuron properties and CellPropDB for data regarding membrane channels, receptor and neurotransmitters expressed in specific types of cells. These databases were a crucial resource for computational neuroscience, since experimental data at the time was very seldom available to modelers. Model DB and NeuronDB are also data sources for the INCF KnowledgeSpace.